I grew up under the influence of the Atlantic Ocean bathing the Canary islands. A blend of cultures. Geographically Africa, politically Europe, and closer to Latin America culturally. I was soon interested in hypnosis and states of consciousness, and later on in eastern traditions. I learned from local healers, about their capacity to align the body and enjoyed their good humor. Later on, I had an introduction to Shiatsu healing. Life drove me to graduate in Psychology at La Laguna University and specialize as a Master in Clinical and Health Psychologist in 2005 in Granada, where I completed the Clinical Specialty at the AEPC (Spanish Association of Behavioral Psychology) practicing with feeding disorders. Meanwhile studying Anthropology at Granada University and UNED. In those days I began the Yoga practice and learning Tantra at Escuela Vedica with Swami Shankaratilakananda. These teachings gave me a wider understanding of true wisdom and my whole being resonated in blissful states never before experienced. I studied a form of dynamic and energetic yoga called Vyayam Yoga and Traditional Hatha Yoga. I also joined several seminars about Tantra, numerology, life, and death, meditation… These experiences inspired me on a pilgrimage for wisdom all over India for half a year and in Thailand in 2010 for Self-discovery. I was blessed to join the Kumbh Mela, the largest concentration of yogis in a festival with ritual bathing in the Holy Ganges. Studied Yoga and Philosophy with Swami Dharmanand at Ved Niketan Ashram in Rishikesh. Aiming for a full Yoga experience I traveled learning Ayurveda, Shiatsu, Thai massage, and Healing.It was on my second trip to India that I could study with Dr. Avdhoot Shivanand the healing science of ancient Rishis known as Cosmic healing and followed these teachings all around the globe attending seminars in London, Austria, and South Africa. 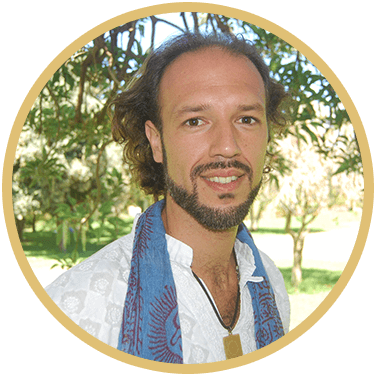 I included dance as an instrument for liberation after deep freedom tantric dance with Swami Akash. This experience of awakening the divinity within through movement touched me deeply. So I participated in workshops on Biodance, Vital Dance, Contact Improvisation, 5 Rhythms, and circle dervish dance to explore and share this medicine in several Dance Therapy workshops. In 2013 I trained in the Ayurvedic Panchakarma detox process with Dr. Nayana Rao, from Udupi, India. Organizing several retreats and teachings on Ayurveda, abhyanga, and shirochampi massage. Other experiences with wisdom keepers like Don Chabelo, Huichol Indian, and especially with Abuela Margarita and Carlos Jesus Castillejos from Toltec tradition, introduced me to Native American wisdom. Finally recognizing one and the same source. In 2014 I trained in Biogestalt therapy and group dynamics with the Instituto Biogestalt, directed by Antonio Asin and Maria Zubicaray. Learning bioenergetic character body reading, holotropic breathing and rebirthing therapy, art therapy, and other techniques.
My greatest gift is to have the guidance of the Shiv Yog lineage in my path for kundalini and healing sciences and eternal gratitude to His Holiness Dr. Avdhoot Baba Shivanad. Recognized by several governmental institutions in India and USA  for his contributions to Integrative Medicine. Educating medical professionals in the ancient science of Shiv Yog, awakening the dormant healing powers within everyone, and revealing the science beyond science that integrates body, mind, and soul. My intention is to work to inspire people in their path. For healing and awareness.

She is a free soul and my inspiring mate walking the path of Unconditional Love. This yogini left home to learn yoga since her youth in India. Originally from the Czech Republic, she has followed her heart to a wild self-encounter. With vision quests, dark retreats, Vipassana, Toltec teachings, and also sharing the path of true spirituality of Shiv Yog. This “Firewoman” (guardian of the sacred fire for the temazcal ceremonies) will lead you with her melodious voice into heart expansion.

Teaching the path to authenticity and the achievement of inner freedom.
Originally from Tenerife, Ricardo has lived the last years in Scandinavia trained in Mindfulness, Tantric Philosophy, Communication, Coaching, and Emotional Intelligence as well as other aspects related to personal and social development. These processes and methods together with his experience as a psychotherapist and team coach are blent into a holistic approach to guide you into a higher version of yourself.

A very rooted woman from Brazil, who shares the “shamanic” wisdom of the elements. She guides the Temazcal ceremonies (sweat-lodge) as medicine to remember that we are dreaming this big dream we call Life. She masters the art of Kahlay or Toltec magical movements to become aware of our essence.

Born in Tenerife, her love for cooking came to her since early childhood from the mother. She is a lover of traditional cuisine, prepared slowly and with passion. Her cuisine is characterized by the choice of fresh local products seasoned with spices and elegant care in the presentation of dishes.

Gifted with the talent of spine healing, she has mastered the spiritual healing to align the spine without touching the patients; Barbara also uses Craneo-Sacral therapy to give a full treatment that makes people almost float in the air. She shares “From chanting into stillness”, a mantra singing workshop to enter a circle of joy and presence.

Fully immersed in Contact Improvisation Dance since 1999, Chetan is creating a space for free expression through movement. He is more than a dance therapist. Trained in Pedagogy in Germany, where he comes from, his quest has led him to explore theater, martial arts, and Tibetan pulse healing. He is simply Authentic. + info: http://wp.dance-tribe-healing.de/

Copyright © 2017 YogaEnTenerife All Rights Reserved | Web Design & Development by BrandNetizen
Manage Cookie Consent
To provide the best experiences, we use technologies like cookies to store and/or access device information. Consenting to these technologies will allow us to process data such as browsing behavior or unique IDs on this site. Not consenting or withdrawing consent, may adversely affect certain features and functions.
Manage options Manage services Manage vendors Read more about these purposes
View preferences
{title} {title} {title}